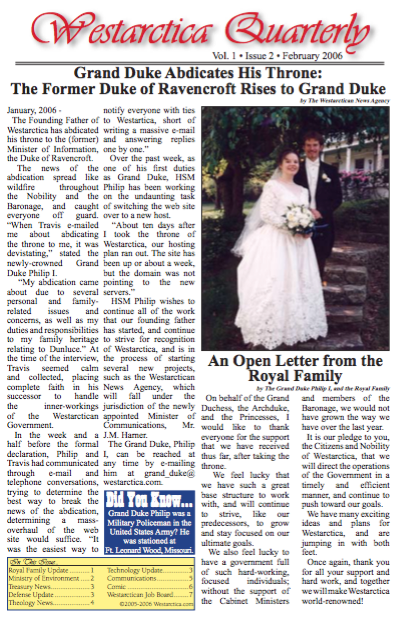 The first issue was published in Fall 2005 and was three pages long. Free copies were sent via postal mail to all Westarctica's citizens and nobles. It contained eight news stories and a small "Did you know?" section with trivia about Westarctica. Each story was two to three paragraphs long and reported on significant diplomatic and internal events that might be of interest to the general population including:

The second issue was published by Grand Duke Philip in February 2006. It was seven pages long and contained twelve news stories and editorials written by the Grand Duke and the ministers of the Grand Ducal Cabinet. The leading headline reported on the abdication of Grand Duke Travis, which had occurred the month prior to publication.

Other significant stories and articles included:

After only two issues, Westarctica Quarterly folded in March 2006 due to serious health issues that prevented Grand Duke Philip from editing and publishing further material.

Although the function of the newsletter had largely been replaced by the Westarctica Citizen's Group on Facebook, in September 2021, Grand Duke Travis decided it was time to begin publishing Westarctica Quarterly again. This time, the format of the newsletter was condensed to a one-page digital PDF. The first issue of this new edition, dubbed Volume 2, was released on 10 September 2021.

After the successful relaunch, management of Westarctica Quarterly was handed over to the Duke of Fox Grove under his purview as Minister of Culture