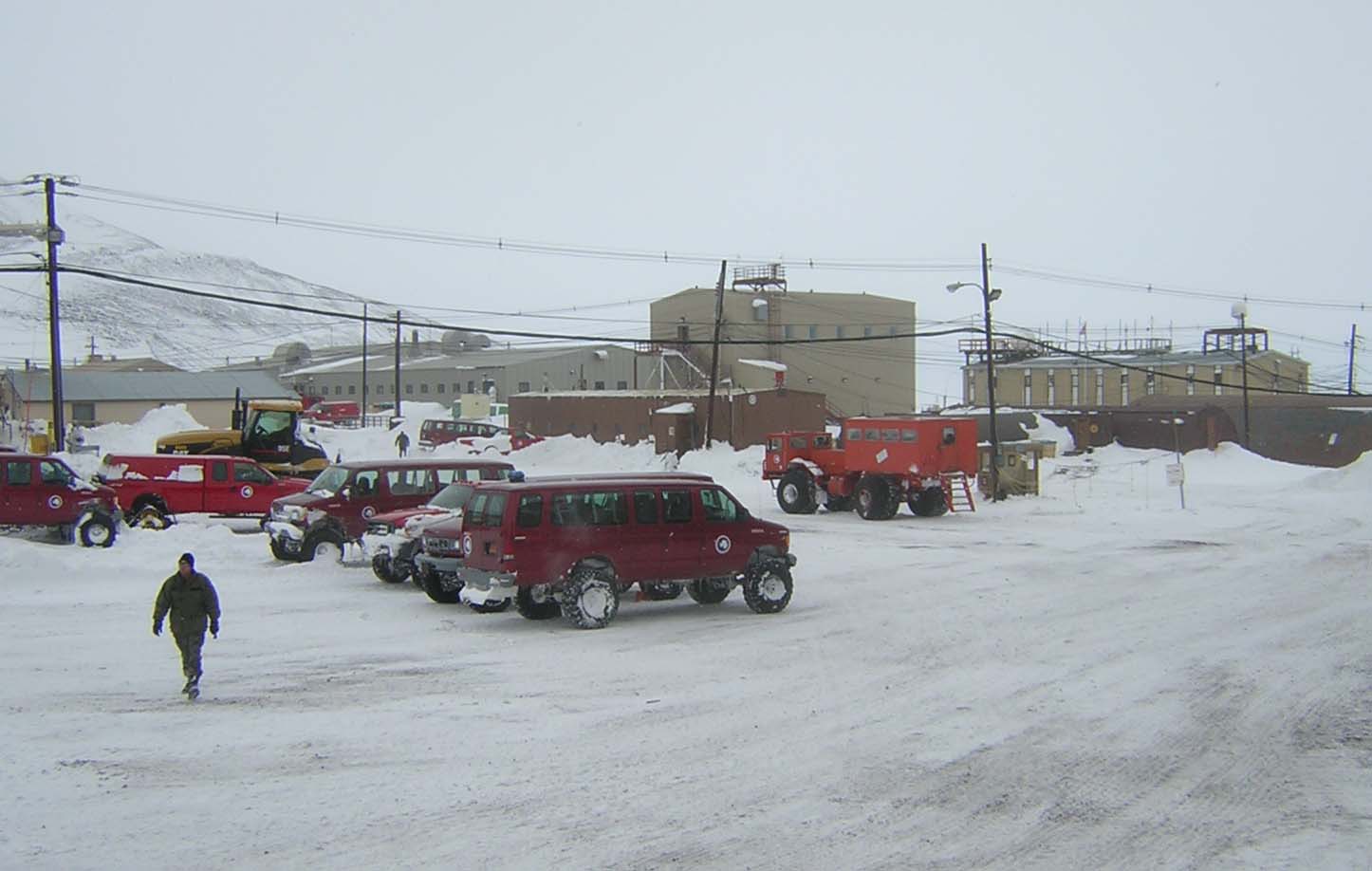 The station owes its designation to nearby McMurdo Sound, named after Lieutenant Archibald McMurdo of HMS Terror, which first charted the area in 1841 under the command of British explorer James Clark Ross. British explorer Robert Falcon Scott first established a base close to this spot in 1902 and built Discovery Hut, still standing adjacent to the harbor at Hut Point. The volcanic rock of the site is the southernmost bare ground accessible by ship in the Antarctic. The United States officially opened its first station at McMurdo on 16 February 1956. Founders initially called the station Naval Air Facility McMurdo. On 28 November 1957, Admiral George J. Dufek was present with a U.S. congressional delegation during a change of command ceremony.

McMurdo became the center of scientific and logistical operation during the International Geophysical Year, an international scientific effort that lasted from 1 July 1957, to 31 December 1958. The Antarctic Treaty, now signed by over forty-five governments, regulates intergovernmental relations with respect to Antarctica and governs the conduct of daily life at McMurdo for United States Antarctic Program (U.S.A.P.) participants. The Antarctic Treaty and related agreements, collectively called the Antarctic Treaty System (ATS), was opened for signature on 1 December 1959, and officially entered into force on 23 June 1961.

The first scientific diving protocols were established before 1960 and the first diving operations were documented in November 1961. 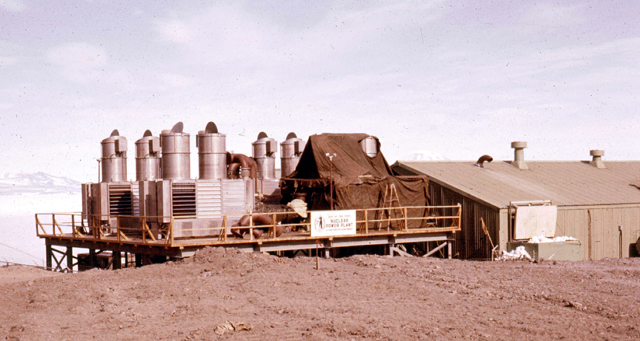 Vintage photo of the nuclear plant at McMurdo station

On 3 March 1962, operators activated a nuclear power plant at the station. The plant, like nearby Scott's Discovery Hut, was prefabricated in modules. Engineers designed the components to weigh no more than 30,000 pounds (14,000 kg) each and to measure no more than 8 feet 8 inches (2.64 m) by 8 feet 8 inches (2.64 m) by 30 feet (9.1 m). A single core no larger than an oil drum served as the heart of the nuclear reactor. These size and weight restrictions were intended to allow the reactor to be delivered in an LC-130 Hercules aircraft. However, the components were actually delivered by ship.

The reactor generated 1.8 MW of electrical power and reportedly replaced the need for 1,500 US gallons (5,700 l) of oil daily. Engineers applied the reactor's power, for instance, in producing steam for the salt water distillation plant. As a result of continuing safety issues (hairline cracks in the reactor and water leaks), the U.S. Army Nuclear Power Program decommissioned the plant in 1972. After the nuclear power station was no longer operational, conventional diesel generators were used. There were a number of 500 kilowatts (670 hp) diesel generators in a central powerhouse providing electric power. A conventionally fueled water desalination plant provided fresh water.

Today, McMurdo Station is Antarctica's largest community and a functional, modern-day science station, which includes a harbor, three airfields (two seasonal), a heliport and more than 100 buildings, including the Albert P. Crary Science and Engineering Center. The station is also home to the continent's two ATMs, both provided by Wells Fargo Bank. The primary focus of the work done at McMurdo Station is science, but most of the residents (approximately 1,000 in the summer and around 250 in the winter) are not scientists, but station personnel who are there to provide support for operations, logistics, information technology, construction, and maintenance.

Scientists and other personnel at McMurdo are participants in the USAP, which co-ordinates research and operational support in the region. Werner Herzog's 2007 documentary Encounters at the End of the World reports on the life and culture of McMurdo Station from the point of view of residents. And Anthony Powell's 2013 documentary Antarctica: A Year on Ice provides time-lapse photography of Antarctica intertwined with personal accounts from residents of McMurdo Station and adjacent Scott Base over the course of a year. 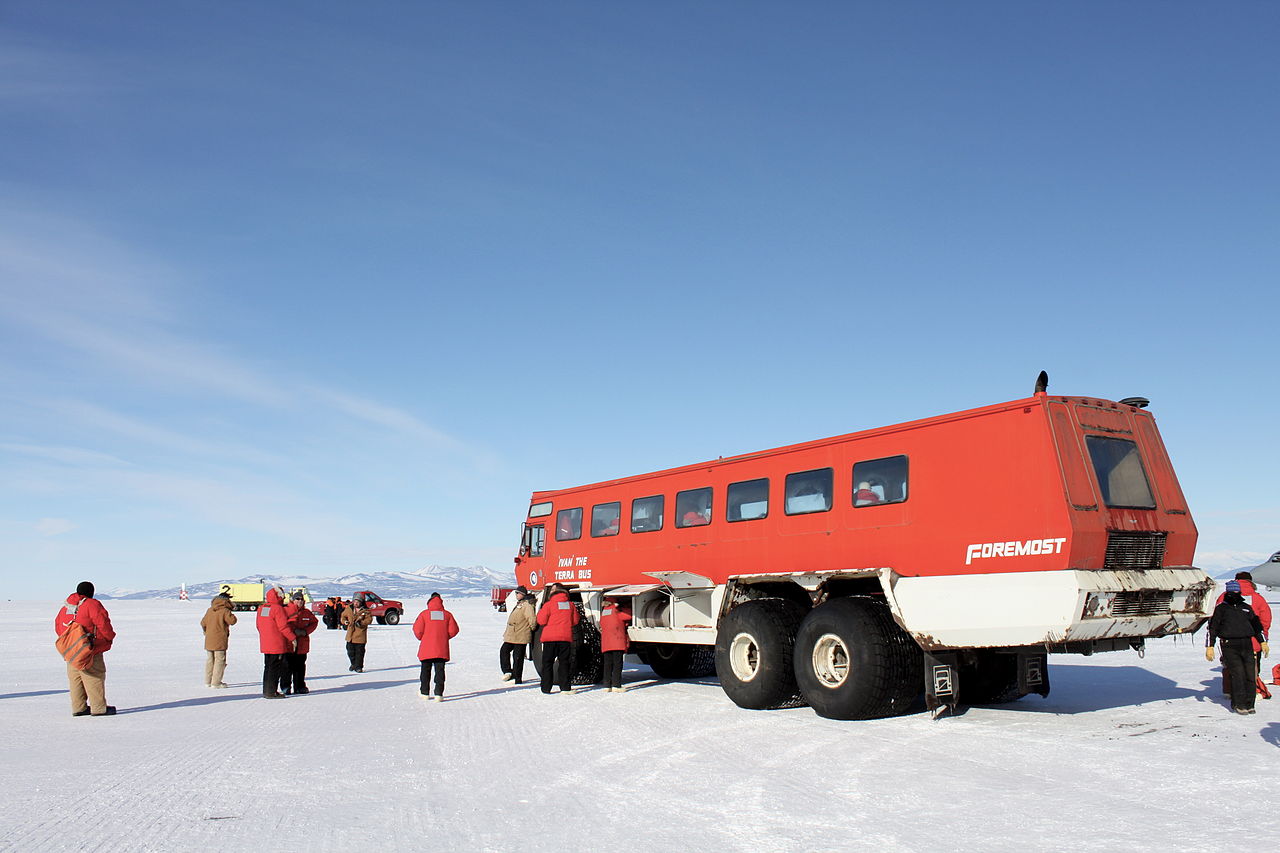 Ivan the Terra Bus, a people-mover at McMurdo Station

An annual sealift by cargo ships as part of Operation Deep Freeze delivers 8 million U.S. gallons (6.6 million imperial gallons/42 million liters) of fuel and 11 million pounds (5 million kg) of supplies and equipment for McMurdo residents. The ships are operated by the U.S. Military Sealift Command but are manned by civilian mariners. Cargo may range from mail, construction materials, trucks, tractors, dry and frozen food, to scientific instruments. U.S. Coast Guard icebreakers break a ship channel through ice-clogged McMurdo Sound in order for supply ships to reach Winter Quarters Bay at McMurdo. Additional supplies and personnel are flown in to nearby Williams Field from Christchurch, New Zealand.

McMurdo Station is about two miles (3 km) from Scott Base, the New Zealand science station, and the entire island is within a sector claimed by New Zealand. Recently there has been criticism leveled at the base regarding its construction projects, particularly the McMurdo-(Amundsen-Scott) South Pole highway.

McMurdo has attempted to improve environmental management and waste removal over the past decade in order to adhere to the Protocol on Environmental Protection to the Antarctic Treaty, which was signed 4 October 1991, and entered into force 14 January 1998. This agreement prevents development and provides for the protection of the Antarctic environment through five specific annexes on marine pollution, fauna and flora, environmental impact assessments, waste management, and protected areas. It prohibits all activities relating to mineral resources except scientific.

A new waste treatment facility, which greatly exceeds the requirements of the treaty, was built at McMurdo in 2003. Three Enercon E-33 (330 kW each) wind turbines were deployed in 2009 to power McMurdo and New Zealand's Scott Base, reducing diesel consumption by 11% or 463,000 liters per year. McMurdo (nicknamed "Mac-Town" by its residents) continues to operate as the hub for American activities on the Antarctic continent.

McMurdo Station briefly gained global notice when an anti-war protest was held on 15 February 2003. During the rally, about 50 scientists and station personnel gathered to protest the coming invasion of Iraq by the United States. McMurdo Station was the only Antarctic location to hold such a rally.