The Royal Republic of Ladonia is a micronation founded on 2 June 1996.

In 1980, artist Lars Vilks began construction of two sculptures, Nimis (Latin for "too much", a structure made of 75 tonnes of driftwood) and Arx (Latin for "fortress", a structure made of stone), in the Kullaberg nature reserve in north-west Skåne, Sweden. The location of the sculptures is difficult to reach, and as a consequence they were not discovered for two years, at which point the local council declared the sculptures to be buildings, the construction of which was forbidden on the nature reserve, and demanded that they should be dismantled and removed.

Vilks appealed the decision of the council, but lost. He appealed repeatedly, and finally the case was settled, in the council's favour, by the Swedish government. However, in the meantime Nimis had been bought from Vilks by the artists Christo and Jeanne-Claude after the death of Joseph Beuys, who bought it in 1984. On June 2, 1996 Vilks declared the microstate of Ladonia in protest of the local council.

In 1999, another sculpture, Omphalos (named after a sculpture in the temple at Delphi marking the "center of the world"), was created. It was made of stone and concrete, 1.61 metres high and weighing a tonne. The Gyllenstiernska Krapperup Foundation, formed to promote art and culture, accused Vilks of building this sculpture and complained to the police, and in August 1999 the district court ordered its removal. The Foundation had also demanded the removal of Nimis and Arx, but the court ruled against it. The Foundation appealed this decision to the Supreme Court, who eventually ruled against it. The police were unable to positively identify Vilks as the sculptor, but the district court held that he was.

The removal of Omphalos was itself controversial. Vilks was ordered to find an acceptable way to remove the sculpture. He proposed blowing it up on 10 December 2001, Nobel Day and the 100th anniversary of the Nobel Prize, and applied to the county council for permission to do so. The county council made a decision on 7 December, but kept it secret until 10 December. By that time, another artist, Ernst Billgren, had bought Omphalos from Vilks, and had requested that it not be damaged. In the early hours of 9 December, a crane boat was sent (by DYKMA, under contract from the Swedish Enforcement Administration) to the site and removed the sculpture (at a cost of 92,500 Swedish krona, billed to Vilks). Despite the new owner's request, the sculpture was damaged by handling. In response to this, the Enforcement Administration was satirically declared to be "Performance Artist of the Year" in 2002.

Afterwards, Vilks applied to the county council again, this time for permission to erect a memorial in the place that Omphalos had stood. Permission was granted by the council to erect a monument no greater than 8 centimeters high. This was duly done, and the monument was inaugurated on 27 February 2002. 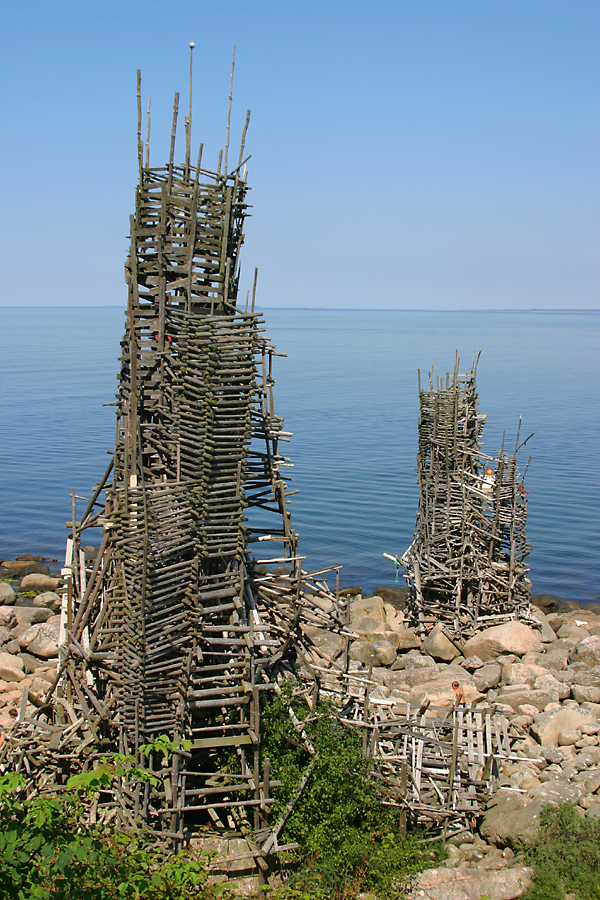 The government of Ladonia is jointly led by a Queen and a President. The President and Vice-President are elected tri-annually, while the Queen, once crowned, reigns for life.

The current Queen is Queen Carolyn. Vilks, the State Secretary, performs or oversees many of the day-to-day operations of the microstate, including processing new citizenship applications and posting photos and news items to the Ladonian online "newspaper". The Cabinet Ministers are the legislative body in Ladonia, and they participate in debates and vote on proposals via the Internet. Many Ladonian ministries have artistic connotations and whimsical names.

When it was created, Ladonia had no population. As of 2016, there are 17,752 Ladonian citizens from more than 50 countries. None of the citizens resides within Ladonia's borders, although there has been at least one resident citizen in the past.

Nimis is a series of wooden sculptures situated along the coast in the Kullaberg Nature Reserve, Höganäs Municipality, in the northern part of Skåne County, Sweden. They are a massive, wooden labyrinthine structure connected by several wooden towers, and are said to be mostly constructed from driftwood.

They were begun by the artist Lars Vilks in 1980 and have been the subject of a long-running legal dispute between the Swedish authorities and the artist. As no permission was given to build on the site within the nature reserve, the County Administrative Board in Skåne has sought to have Nimis demolished, despite the fact that it has become a popular tourist attraction.

As Nimis's existence is not sanctioned by Sweden, it is difficult to find - there are no official sign posts in Sweden, nor is it marked on maps. It lies a few kilometers northwest of the town of Arild and somewhat farther from the town of Mölle, and can only be reached on foot following a well-worn path with yellow Ns painted on trees and fences. The path begins as an easy stroll past Himmelstorp, a well-preserved eighteenth-century farmstead, but quickly becomes a steep and rocky climb down to the coast. 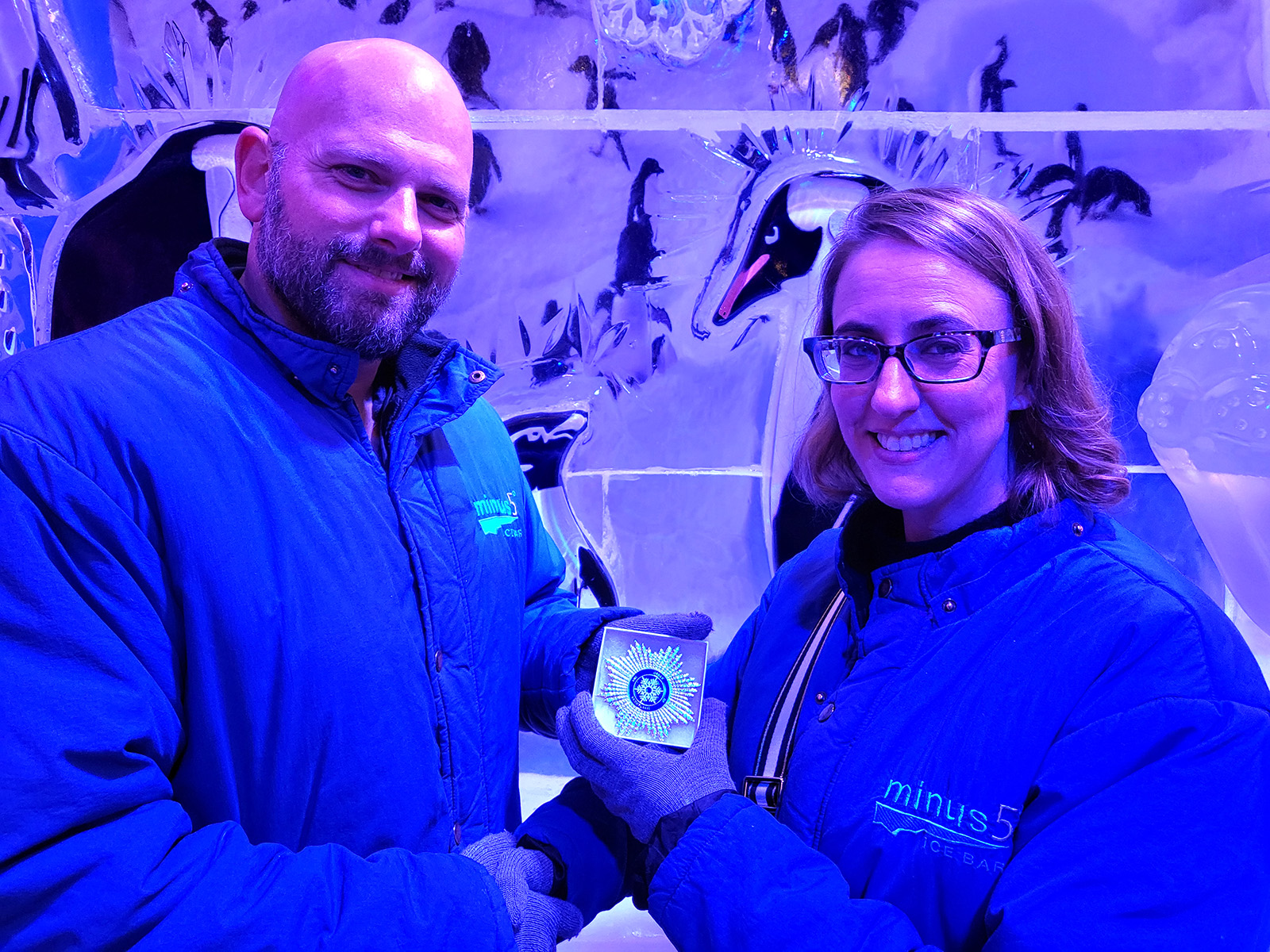 Queen Carolyn receiving the Order of the Snowflake in 2021

Beginning in 2014, diplomatic relations between Ladonia and Westarctica began to flourish. Since then, there have been numerous occasions of State shared between the two nations. Queen Carolyn has been granted numerous awards, including the Order of the Orca and three grades in the Order of the Snowflake. Her most recent investure, as a Dame Grand Commander, was conducted at the Minus5 Ice Bar in Las Vegas, Nevada to celebrate Westarctica's 20th Anniversary.

Grand Duke Travis has also met with other members of Ladonia's government, most notably with Deputy Prime Minister Matthew Salazar at the Feb 2018 Ladonia Visit, which occurred in the Colony of Calsahara. Mr. Salazar would later go on to serve a term as Acting Prime Minister of Ladonia.

A large delegation from Ladonia attended MicroCon 2022 where Queen Carolyn announced that Ladonia would be hosting MicroCon 2023 in Joliet, Illinois.

The founder of Ladonia, Lars Vilks, had been living under police protection since 2007 when he published a cartoon depicting the prophet Muhammad as a dog. The sketch caused an international outrage, leading al-Qaeda to offer a $100,000 reward for his murder. In response, the Swedish government assigned protective agents to guard Vilks as round-the-clock bodyguards.

On 3 October 2021, the civilian police vehicle Vilks was riding in was struck by a truck near the town of Markaryd in southern Sweden. Vilks and his two bodyguards were and killed in the collision. Police investigators determined there was no foul play and the incident was declared an accidental death. Vilks was 75-years-old at the time of his death.