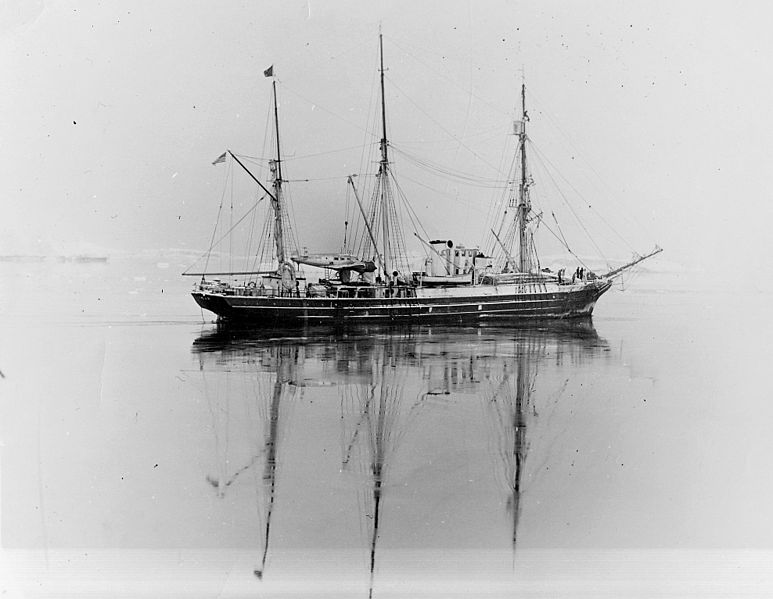 USS Bear pictured in Antarctic waters during operations with the U.S. Antarctic Service

The USS Bear was a dual steam-powered and sailing ship built with six-inch (15.2 cm)-thick sides which had a long life in various cold-water and ice-filled environs. She was a forerunner of modern icebreakers and had an exceptionally diverse service life. According to the United States Coast Guard official website, Bear is described as "probably the most famous ship in the history of the Coast Guard."

Built in Scotland in 1874 as a steamer for sealing, she was owned and operated out of Newfoundland for ten years. In the mid-1880s, she took part in the search for the Greely Expedition. Captained by Michael Healy of the United States Revenue Cutter Service (later part of the U.S. Coast Guard), she worked the 20,000-mile coastline of Alaska. She later assisted with relief efforts after the 1906 San Francisco earthquake.

Her services also included the second expedition of Admiral Richard E. Byrd to Antarctica, and again to the southernmost continent in 1941 to evacuate Americans at the beginning of World War II. She later served in patrol duty off the coast of Greenland for the United States Navy. Between some of these missions, she was a museum ship in Oakland, California and starred in the 1930 film version of Jack London's The Sea-Wolf.

After World War II, Bear was returned to use again as a sealing vessel. Finally, in 1963, 89 years after she had been built, while being towed to a stationary assignment as a floating restaurant in Philadelphia, Bear foundered and sank in the North Atlantic Ocean about 100 miles (160 km) east of Cape Sable Island, Nova Scotia.

Bear was built in 1874 as a seal hunting ship at Dundee, Scotland shipyards. Custom-built for sealing out of St. John's, Newfoundland, Bear was the most outstanding sealing vessel of her day, the lead ship in a new generation of sealers. Heavy-built with six-inch (15.2 cm) thick wooden planks, Bear was rigged as a sailing barquentine but her main power was a steam engine designed to smash deep into pack ice to reach seal herds. At the time of her arrival in St. John's, there were 300 vessels outfitted each season to hunt seals, but most were small schooners or old sailing barques. The new sealing ships represented by Bear radically transformed the Eastern North Atlantic seal fishery as they replaced the hundreds of smaller sealing vessels owned by merchants in outports around Newfoundland with large and expensive steamships owned by large British and Newfoundland companies based in St. John's. Owned at first by the Scottish firm W. Grieve and Sons, she was acquired in 1880 by R. Steele Junior. Bear spent a decade sealing from St. John. In 1884, the Steeles sent Bear back to Scotland for a refit. 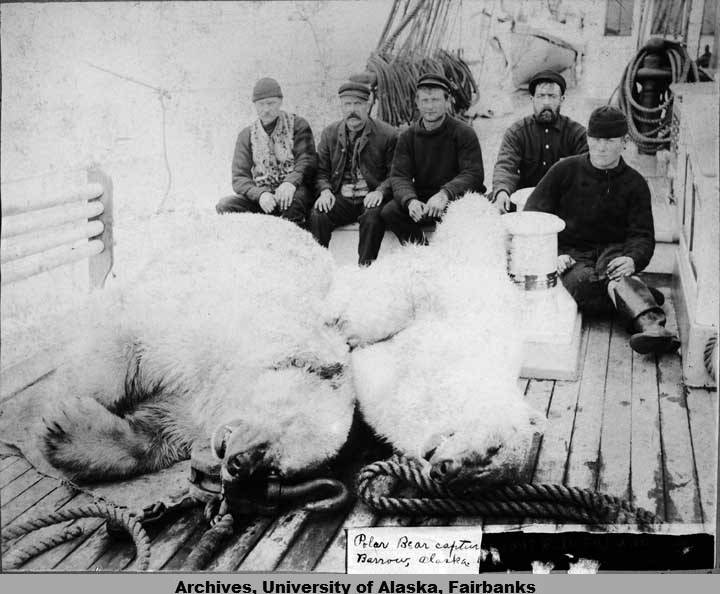 The massive wooden hulls of Newfoundland sealing vessels had proved ideal for arctic exploration. Just back from her refit in 1884 and ready for another season of sealing, Bear was instead purchased by the US government in 1884 and took part in the search for the Lady Franklin Bay Expedition, whose seven survivors were found at Cape Sabine.

Bear served as a revenue cutter in the United States Revenue-Marine from 1885 to 1894 and the United States Revenue Cutter Service from 1894 to 1915 and as a cutter in the United States Coast Guard from 1915 to 1926. Throughout the years from 1885 to 1926, she made the seasonal trek each May from her port in Oakland, California, to sail north to the waters of the Territory of Alaska for the five-month season, cruising 10,000 nautical miles (19,000 km; 12,000 mi) on the Bering Sea Patrol, where she looked out for seal poachers, shipwrecked whalers, and illicit trade with Alaska Natives, ferried reindeer from Siberia to Alaska, and served as a floating courthouse. By order of the United States Department of the Treasury, Bear was given free run to arrest and seize possessions of poachers, smugglers, and illegal traders, as well as take census of people and ships, record geological and astronomical information, take note of tides, and escort whaling ships.

One captain of Bear, Michael "Hell Roaring Mike" Healy, was considered a savior by many of the whalers and native Eskimos, as he bought Siberian reindeer at his own expense for the starving natives to use as the foundation for a new herd in Alaska, paralleling, and possibly in cooperation with, missionary Sheldon Jackson. Healy was the first African-American commissioned officer in U.S. history.

In 1932 the Bear of Oakland was purchased by Rear Admiral Richard E. Byrd for $1,050, as a replacement for the barquentine City of New York. He used her in the Second Byrd Expedition alongside the old steel-hulled lumber ship Pacific Fir, renamed by Byrd Jacob Ruppert, in honor of the New York brewer who was a major sponsor of expedition.

After the expedition, Admiral Byrd leased Bear to the Navy for one dollar a year, for use on his government sponsored (third) expedition. 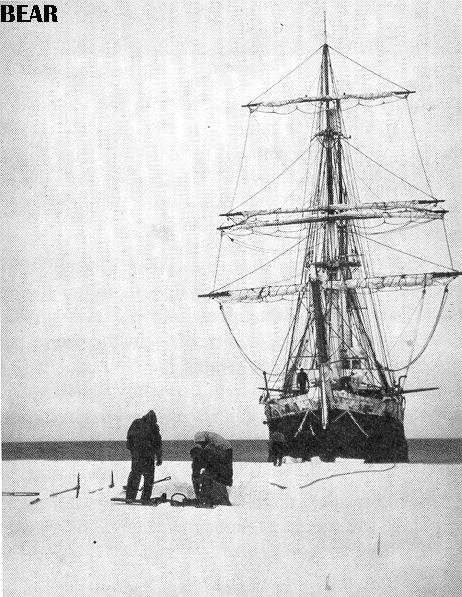 On 11 September 1939 she was re-commissioned in the U.S. Navy for service during the 1939–1941 United States Antarctic Service Expedition, led by Rear Admiral Richard E. Byrd, and renamed USS Bear (AG-29). She carried a Barkley-Grow seaplane on board. Lieutenant Commander Richard H. Cruzen was captain of Bear during the expedition. Cruzen would rise to the rank of rear admiral and commanded the U.S. Navy ships which participated in a large Antarctic expedition named Operation Highjump in 1948.

During her time in the Antarctic, the Bear was used as a base to explore many previously unseen areas of Westarctica. This includes vast stretches of the Walgreen Coast, the Peacock Sound, and the Bear Peninsula, which was named in honor of the ship.

In early 1941, USS Bear assisted in the evacuation of the members of the Antarctic Expedition, as international tensions rose in the months that led up to America's entrance into World War II. Bear arrived at the Mikkelsen Islands, just north of the Antarctic Circle, on 16 March 1941, and its crew helped to build an adequate airstrip to evacuate personnel and equipment from the expedition base in the area.

From 1941 to 1944, USS Bear served in the Northeast Atlantic Greenland Patrol. The rigging was cut down to two masts to become a fully motorized ship. After the capture, on 12 September 1941, of the German-controlled Norwegian sealer Buskø, which was used as a supply ship for secret weather stations, by USCGC Northland, Bear towed the prize to Boston. When more modern ships were available to replace her, Bear was decommissioned on 17 May 1944 and laid up in Boston until the end of the war.

Bear had the distinction of being the oldest U.S. Navy ship to be deployed outside the continental United States during World War II. She was also one of a very few U.S. Navy ships to have served during the Spanish–American War as well as both world wars. (The sailing relics USS Constitution and USS Constellation were both in active commissioned service during World War II but neither left port during the war.)

Bear was purchased from the U.S. government in 1948 by Frank M. Shaw of Halifax, Nova Scotia for $5,199. Shaw intended to use the ship for sealing. Renamed Arctic Bear, her refit for sealing proved costly and with the decline of the large-scale Newfoundland seal hunt, she was laid up in Halifax Harbour subject to on and off again refits, and lay derelict for periods of times as she remained at various moorings around Halifax and Dartmouth.

By the early 1960s Bear was considered for restoration as a museum ship by the City of Dartmouth as well as her old home at Oakland and by the San Francisco marine museum. However the purchase price from Shaw Steamships and the extensive restoration costs scuttled museum plans.

In 1962 she was purchased by Alfred Johnston of Philadelphia for a floating seafood restaurant. Repairs were made to the ship at Industrial Shipping Limited in Mahone Bay, Nova Scotia for her new role including the carving of a new bear figurehead.

In 1963, while in tow by the tug Irving Birch to Philadelphia, Bear foundered about 100 nautical miles (190 km; 120 mi) east of Cape Sable Island, Nova Scotia, at 42°40′N 065°11′W. She went down early in the morning of 19 March 1963 after a gale struck and severed the tow line. The mast collapsed and punctured the hull, causing the sinking. Her crew of two were rescued by Irving Birch.