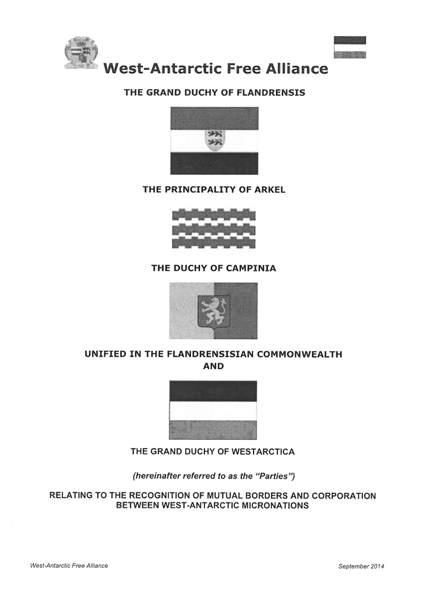 The West-Antarctic Free Alliance is a treaty signed between the Grand Duchy of Flandrensis and Westarctica in September 2014. The treaty had far ranging consequences that were unforeseen at the time it was signed.

After the signing of the West-Antarctic Treaty which ended the Siple War between Flandrensis and Westarctica, the two nations agreed to recognize one another's territorial claims in Marie Byrd Land and both became members of the Antarctic Micronational Union (AMU).

In 2014, Grand Duke Niels of Flandrensis contacted Grand Duke Travis and discussed the possibility of strengthening the treaty between their two nations and raising it to the level of an alliance. The proposed treaty would solidify their diplomatic relationship and include shared foreign policies and guarantee military assistance if either nation were challenged by an outside threat.

The alliance tied many external elements of the two nations together, including shared foreign affairs policies and linked cultural, military, and political endeavors.

In many ways, the alliance merely added to the terms already agreed upon in the West-Antarctic Treaty.

As a consequence of signing the West-Antarctic Free Alliance, in 2016, Westarctica was obligated to follow after Flandrensis when it left the Antarctic Micronational Union. The departure was primarily due to conflicting political views between Grand Duke Neils and Yaroslav Mar, the Secretary-General of the AMU, although, ostensibly, the dispute was over Yaroslav's resistance to making environmental policy a hallmark of AMU's mission. When two of the most powerful and influential nations left the Union, several other nations followed suit and the AMU lost much of its prestige.