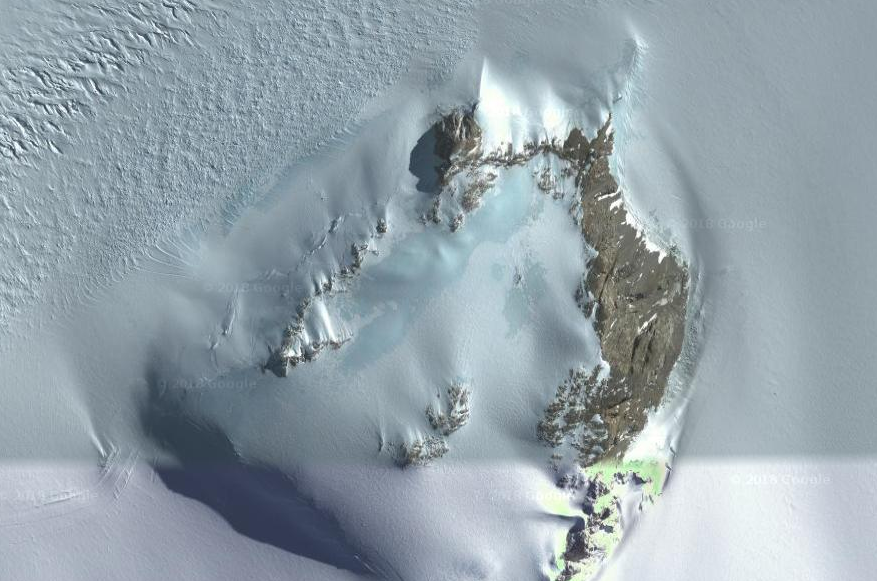 Mount Isherwood as seen from a satellite photo.

Mount Isherwood (74°59′S 113°43′W) is a flattish, mainly ice-covered mountain with steep rock slopes, located 4 miles (6.4 km) west-southwest of Mount Strange in the Kohler Range on the coast of Westarctica.

The mountain was first photographed from aircraft of U.S. Navy Operation Highjump in January 1947. It was named by the Advisory Committee on Antarctic Names for William F. Isherwood, a geophysicist on the United States Antarctic Research Program South Pole—Queen Maud Land Traverse II during the 1965–66 season, and on the Marie Byrd Land Survey 1966–67.

On 29 July 2018, Grand Duke Travis began receiving requests from participants of the Greatest International Scavenger Hunt (GISH) who were seeking to obtain a deed of land that had been granted to a rock, tree, or other natural object. This was in the spirit of the Jackson Oak, a 95-year old oak tree in Athens, Georgia that legally owns itself and the land under its branches. Many of the GISHers had previously become citizens of Westarctica during the 2016 scavenger hunt which resulted in the creation of Citizen's Day as a public holiday.

As Westarctica has no trees, the Grand Duke decided to name rocks or pebbles after whoever made the request for the land deed. That rock or pebble was then legally granted one square foot of land in Westarctica with 99 years of tax exemption.

The location selected for the property handout was Mount Isherwood, partly because it had attractive satellite photos showing its rocky geography, and partly because the name was extremely close to "GISHer." On 31 July 2018, the entire area surrounding the mountain was declared a preserve dedicated to GISH and its participants. A total of 640 one-square-foot plots were ultimately deeded to natural objects, mostly to rocks and pebbles.