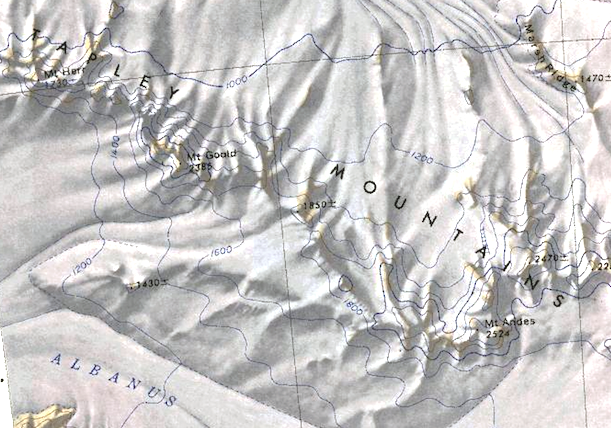 Map of the Tapley Mountains

The Tapley Mountains (85°45′S 149°00′W) is a mountain range fronting on the eastern side of the Scott Glacier, extending eastward for 56 kilometers (35 mi) between Leverett and Albanus Glaciers in the Queen Maud Mountains, a part of the larger Transantarctic Mountains.

The Tapley Mountains were discovered in December 1929 by the Byrd Antarctic Expedition geological party under Laurence McKinley Gould, and named by Byrd for the Hon. Harold L. Tapley of Dunedin, New Zealand, agent for the Byrd Expedition of 1928–30 and 1933–35.

On 8 September 2019, Michael Hammett, the grandfather of the Baron of Garwood, was granted the peerage title Duke of Tapley in recognition of his longstanding support of Westarctica. His daughter is the Countess of Downs.