The 2019 Prime Minister election was a popular election to select Westarctica's Prime Minister. The election occurred from 8 - 10 February of 2019 and was overseen by the Commissioner of Elections.

History of the Election

Westarctica's first Prime Minister, Wolf Tulier, was not democratically appointed. Instead, he ascended to the role with the support of Grand Duke Travis, who was serving as Protector of Westarctica. Before agreeing to take part in the coup to overthrow Grand Duke Jon-Lawrence, Travis stated that he would only take action if Wolf agreed to handle the day-to-day running of the government as Prime Minister.

When the throne was reinstated on 21 September 2012, it marked the beginning of a slow decline in both the need for and powers of the position. After a search for a suitable replacement, Wolf stepped down from power on 23 May 2017 and the position of Prime Minister became vacant.

Beginning in 2017, Grand Duke Travis openly speculated that he would like to have the citizens of Westarctica vote for the next Prime Minister. On 5 December 2018, the Grand Duke wrote a Crown memo for members of the Royal Council outlining his proposal to hold a national election to decide who would be the next Prime Minister. Shortly after, on 18 December, the Baron of Abele was appointed Commissioner of Elections to serve as the impartial manager of Westarctica's electoral process.

On 20 December 2018, Grand Duke Travis announced an application period for citizens to submit themselves for candidacy in the upcoming election. On 9 January 2019, the Grand Duke announced the four candidates. This list was selected from the applicant pool, based on each candidate's qualifications. This announcement kicked off a formal campaign period, leading up to the election from 8-10 February 2019. Voting was done electronically, and was open to all citizens.

On 8 February 2019 at 6:00am Pacific Time, a mass email was sent to 1,873 citizens of Westarctica containing an introduction to the four candidates as well as a link to cast their vote in the election. The election poll contained only two questions: one verifying the citizen's e-mail address and the second contained a randomized display of the four candidates for Prime Minister.

C Jordan Farmer, also known as Duke Jordan of the Bear Peninsula, began his public service to Westarctica in March of 2018 as the Minister of Citizenship & Immigration. Since April of 2018, he has also served as Commissioner of the Westarctica Civilian Corps. Jordan won the election with 32.7 percent of the votes.

Danni Michele became a citizen during GISHWHES 2016, and began her public service to Westarctica in June of 2018 as the Director of Communications. In December of 2018, the position was elevated to Minister of Communications. Danni placed second, with 31 percent of the votes.

Stefan Winkler, also known as Count Stefan of Goldstream, began his public service to Westarctica in February of 2018 as the Minister of Foreign Affairs. Stefan came in third, with 26.5 percent of the votes.

Of the four candidates, David Galway is the only one with no prior service in Westarctican Government. He is a citizen of Westarctica who runs a consulting business in the United Kingdom. David came in last, with 9.8 percent of the votes.

Results of the Election 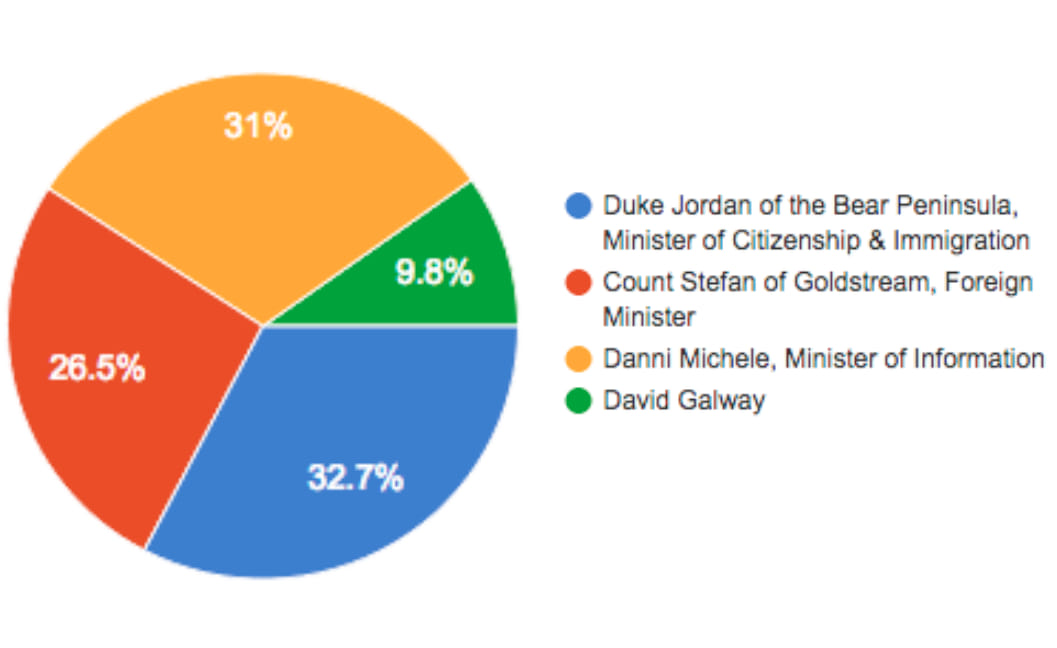 The results of the election

Within the first five hours, 10% of eligible citizens had cast their vote, but there was no clear front runner. Voting concluded the evening of 10 February, and the final count was independently confirmed by the Commissioner of Elections and Grand Duke Travis.

A total of 306 votes were cast from among 1,884 citizens who were eligible to vote, meaning roughly 16% of eligible voters participated. The election was decided by a margin of five votes, marking a very closely contended race. The results were as follows: