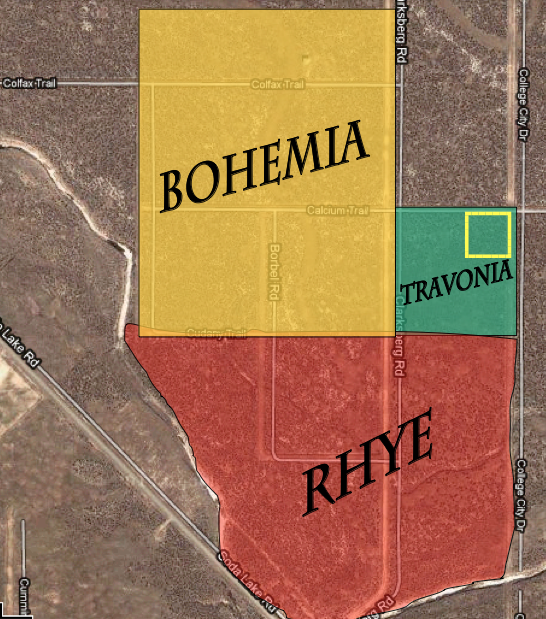 The Principality of Rhye is one of two principalities in the Colony of Calsahara, the other being the Principality of Bohemia. On 20 August 2019, Duke Jordan of the Bear Peninsula was granted the peerage title Prince of Rhye.

When Calsahara first proclaimed independence, King Montague wished to imprint the music of the progressive rock group Queen upon the national identity of the new country. To this end, he named several places in the country after Queen songs, including the Calsahara's only river, the Seven Seas of Rhye. The name of the principality comes directly from the Queen song "Lily of the Valley," which contains the lyrics: "messenger from Seven Seas has flown, to tell the King of Rhye he's lost his throne."

The Principality was created by Royal Decree by King Montague in 2011 following the territorial expansion of Calsahara from a 2.5 acre kingdom to a 120 acre empire. During the expansion, the newly acquired landmass was subdivided into three semi-autonomous areas: the Principality of Bohemia, the Principality of Rhye, and the Kingdom of Travonia. At the time of their creation, the King of Calsahara held all three titles, and although he originally promised to bestow the princely titles upon his wife, Queen Cathryn, and his son, Crown Prince Nicholas, this transfer never actually occurred.

Following the Liberation of Calsahara in 2017, the principality was absorbed into the Crown of Westarctica along with the rest of Calsahara's territory.

Rhye is approximately 55 acres in size and comprises the southern half of Calsahara from the southern border of Otisburg to the Seven Seas of Rhye. It is separated from the border with the United States by 3,300 feet of shoreline, with a seasonal depression, known as the "Brandenburg Gate," linking the principality directly with the U.S.

It contains the following subregions:

Arms of the Prince of Rhye 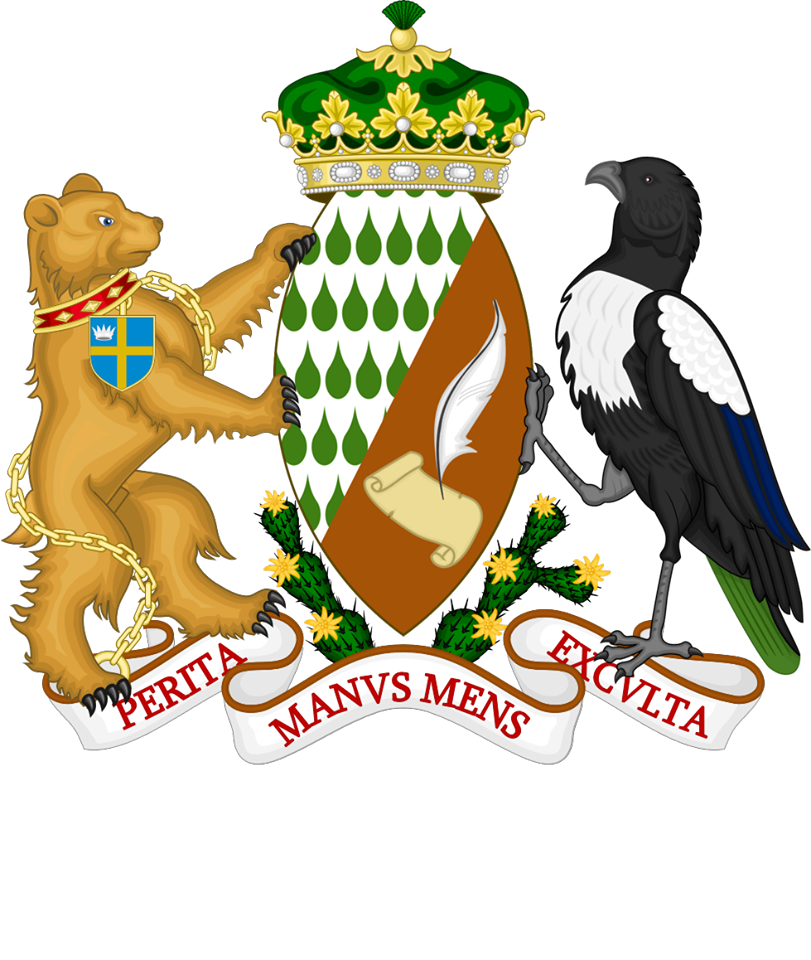 The arms for the Prince of Rhye were created in early 2020, by the Baron of Abele, the 2nd Ellsworth King of Arms. Instead of completely unique arms for the title, Jordan opted to make them thematically similar to those of Westarctica's Duchy of the Bear Peninsula. This was done to reflect that the holder of one also serves as the other. Given Calsahara's status as a colony, the arms fall in line with Westarctican heraldic language, albeit with elements unique to Calsahara, such as the use of the green-felted coronet, and Maasai shield shape.

Coronet: The Calsaharanan Princely coronet, presented in Or and Vert.
Escutcheon: Maasai shield party per bend sinister. Argent dexter chief with goutty Vert, Tenné sinister bend, with quill pen and parchment proper.
Supporters: Dexter brown bear proper rampant, collared in Gules and Or with Or chain and Westarctican arms pendant suspended; sinister magpie proper vigilant.
Motto: Banderole bearing "PERITA MANUS MENS EXCULTA."
Compartment: Flowering prickly pear cactus proper.
Symbolism: In the language of heraldry, the green drops or gouittes from the shield could be read to mean hope strewn upon a field of peace. The green was also chosen to represent Jordan's birth month, and as it is a color often associated with the US Army, where Jordan spent the better part of a decade. The white also represents sincerity and the long winters encountered during his time in Northern Minnesota. The quill pen and parchment symbolize scholarship, knowledge, and writing; as the former two are personally important to Jordan, and he was part of the group responsible for writing the Constitution of Westarctica. The brown was chosen to represent worthy ambition. The bear as a supporter symbolizes strength and cunning. While the Ducal arms of the Bear Peninsula utilizes a polar bear, the Calsaharan arms utilize a brown bear, a species encountered in Southern California. The Calsaharan bear supporter is shown with a collar and a Westarctican arms pendant. This is to symbolize Calsahara's status as a colony, and that fact that the title is inherently tied to the Duchy of the Bear Peninsula. The magpie was chosen to represent good fortune, intelligence, and a sturdy spirit. Additionally the magpie is a symbol of Korea, a nation with personal history for Jordan. The motto means "skilled hand, cultivated mind" in Latin. The flowering prickly pear cactus symbolizes the Prince's residency in the Sonoran Desert at the time he was named to the title.