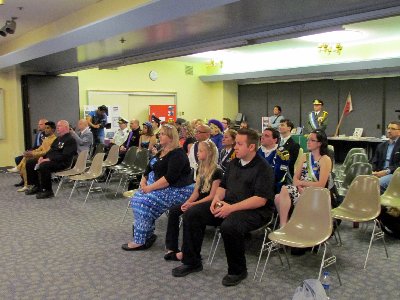 The audience seating area of MicroCon 2015

MicroCon is a convention of micronationalist government representatives, held biennially in odd years since 2015. MicroCon was created by President Kevin Baugh of the Republic of Molossia as a venue for delegates of micronations around the world "to share their ideas, dreams and worlds with each other."

Starting in 2019, the future location of each convention branded under the MicroCon banner will be determined by the MicroCon Committee. The committee is a loose group of nations which have previously hosted MicroCon and provide gentle guidance to hosts of future events. Prospective hosts are asked to submit a proposal for hosting an event. These proposals are then vetted by the committee to ensure each convention is of increasingly superior quality.

The first event to occur under the MicroCon name occurred on 11 April 2015 in Anaheim, California. It was organized and hosted by the Republic of Molossia and was attended by representatives from 17 different micronations. During the event, Grand Duke Travis gave a presentation about the importance of micronations having worthy causes. There were also two days of pre-events leading up to the actual convention: a day-trip to Disneyland and a walking tour of Hollywood Boulevard. This event set the standard for future MicroCons.

The second MicroCon was a joint venture between the Republic of Molossia and the Kingdom of Ruritania. It was held in the suburban area of Atlanta, Georgia. Delegates from 26 different nations attended the main conference. Pre-events included a diplomatic reception at the Embassy of Ruritania, while a bowling tournament and a trip to Stone Mountain Park occurred on the day after the event.

The third MicroCon occured in Hamilton, Ontario (part of the greater Toronto area) in Canada from July 19 - 21, 2019 and was hosted by the government of Slabovia. The Grand Duke led a larger Westarctican delegation than had attended any previous summit. The delegation was four persons strong, whereas in previous iterations, the nation was represented only by the Grand Duke and Prince-Consort.

MicroCon 2022 occurred in Las Vegas, Nevada from August 4 - 7, 2022. It was hosted by the government of Westarctica. The event had initially been planned for Summer of 2021, but was delayed due to the global COVID-19 pandemic.

Although the details of MicroCon 2023 have not yet been announced, it will occur in a suburb of Chicago, Illinois during the summer of 2023. It will be hosted by the Royal Republic of Ladonia.