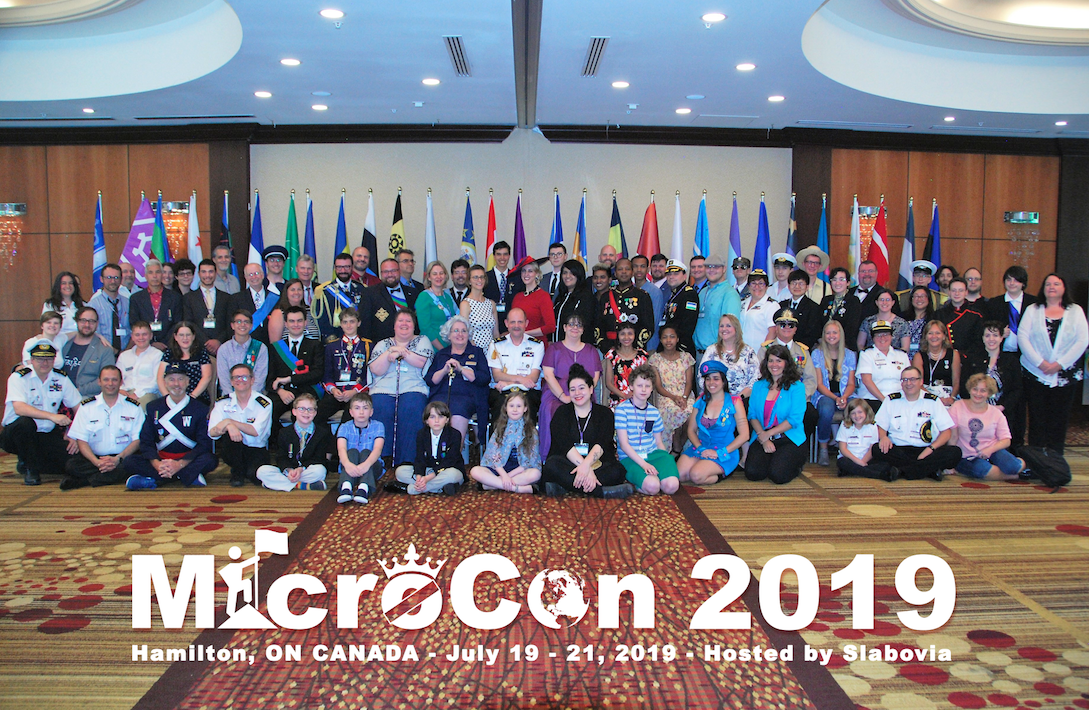 Group photo from MicroCon 2019 featuring all delegates from all attending nations.

MicroCon 2019 was a gathering of leaders and representatives of micronations that took place in Hamilton, Ontario from 19 - 21 July 2019. It was the third such conference to occur under the MicroCon banner, the first having been MicroCon 2015 in Anaheim, California, and the second, MicroCon 2017, in Atlanta, Georgia. With an attendance figure of 103 people, it was double the size of the previous MicroCon.

While the conference was scheduled to occur over the course of three days, the bulk of the structured events took place on the second day, July 20th. This was when various representatives gave presentations on a wide array of micronational topics. That evening featured a formal dinner and gala. The first and third days of the conference had a more relaxed atmosphere, as many attendees also used them as travel days. Slabovia, the hosting nation, offered guided tours, and there was time for nations to work on diplomatic relations with representatives from other micronations.

The event was hosted by the government of Slabovia. 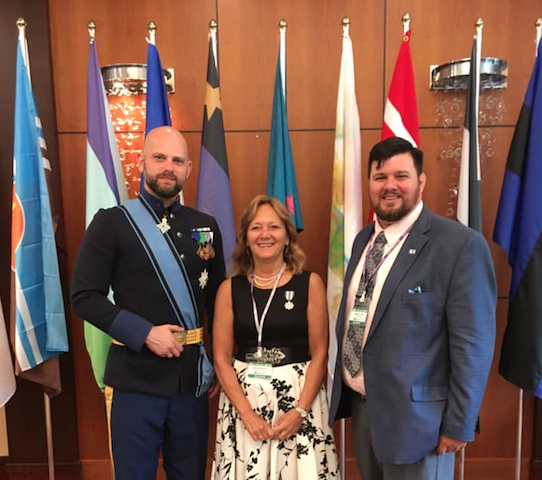 At previous MicroCons, Westarctica was represented by Grand Duke Travis and Prince-Consort Dinny. MicroCon 2019 marked the first summit with an actual delegation. The Grand Duke later remarked that it was a relief to have some assistance in talking with members of so many countries.

In the evening of Friday, 19 July, the delegates gathered together in the grand ballroom of the Courtyard Marriott in Hamilton, Ontario for a diplomatic reception. Although the attire was semi-formal, many leaders chose to wear the full regalia of their office. The reception cultivated a casual atmosphere with a cash bar and light refreshments served by Slabovia's Organizing Committee.

During the reception, many delegates reconnected with one another since MicroCon 2017, while many others were meeting for the first time. Grand Duke Travis took this opportunity to seek out several leaders of micronations he had researched over the internet including the Jusin Republic, the Grand Duchy of Danduros, and the Republic of Obscurium. The Countess of Benton spent time conversing with King Max of Jupiter, while Prince-Consort Dinny found his way to Constable Lexi Baugh of Molossia, an old friend he had not seen since the 2018 Summit Upon the Seas. 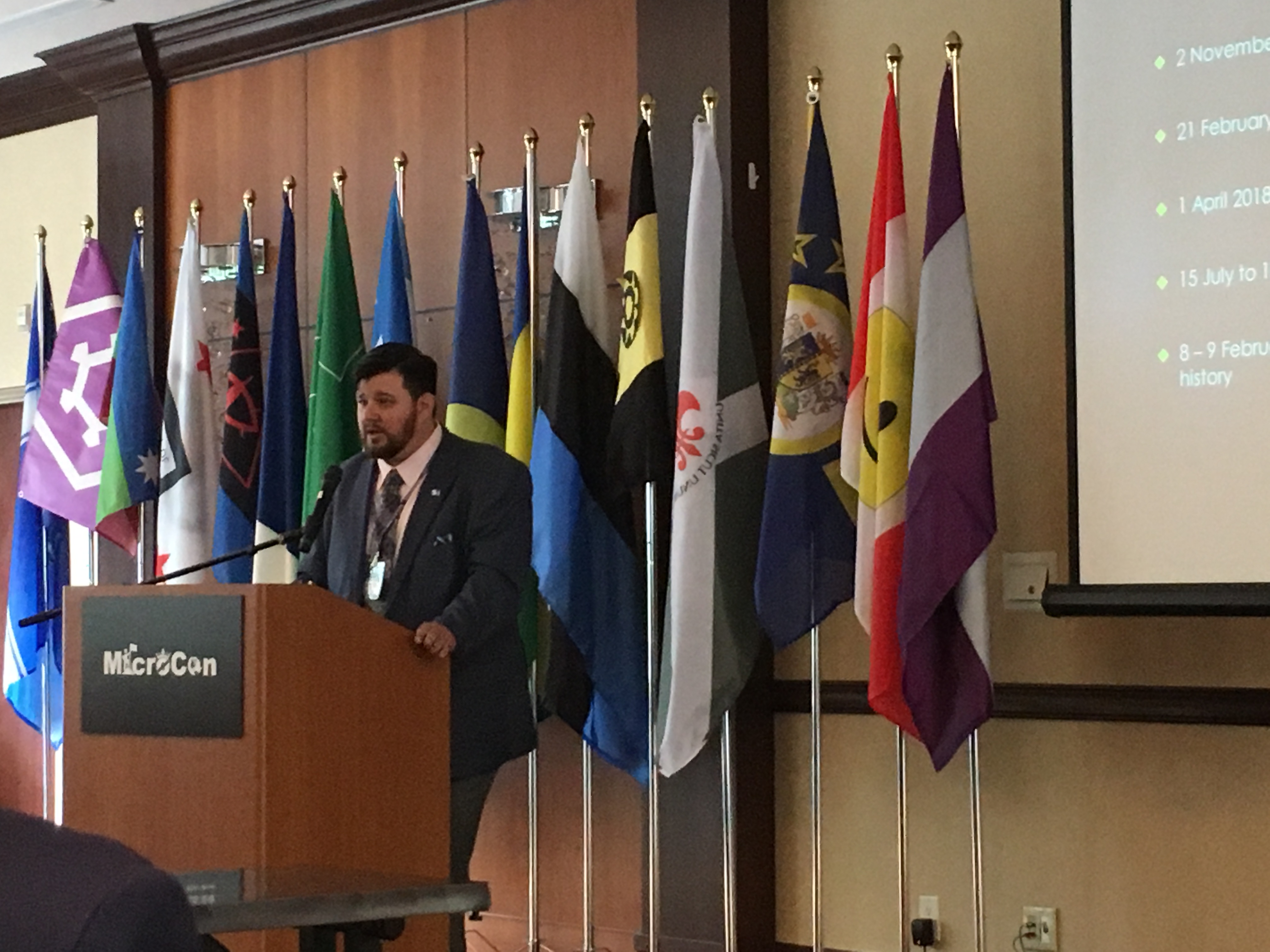 The main conference occurred from 8:00am and lasted until 4:00pm. Slabovian Vice Admiral Patrick T. Goddard served as master of ceremonies for the event.

Speakers were allotted 15 minutes for their speeches, which were divided into four sessions based around a specific theme. Between the sessions, the Aerican Empire sponsored coffee breaks with cookies, coffee, and tea. Attendees made good use of this free time by conversing and discussing the presentations.

Westarctica's delegation sat together in the second row on the far right side of the room, although their traditional spot has been in the same location in the front row. While Westarctica was the only nation to have multiple presenters, Grand Duke Travis was the only delegate selected to give two speeches: the first on micronational conflict and the second was to announce that Westarctica would be hosting MicroCon 2021 in Las Vegas, Nevada.

Of the sixteen originally scheduled speakers, only one, a delegate from the Kingdom of Ruritania failed to appear at the appointed time. 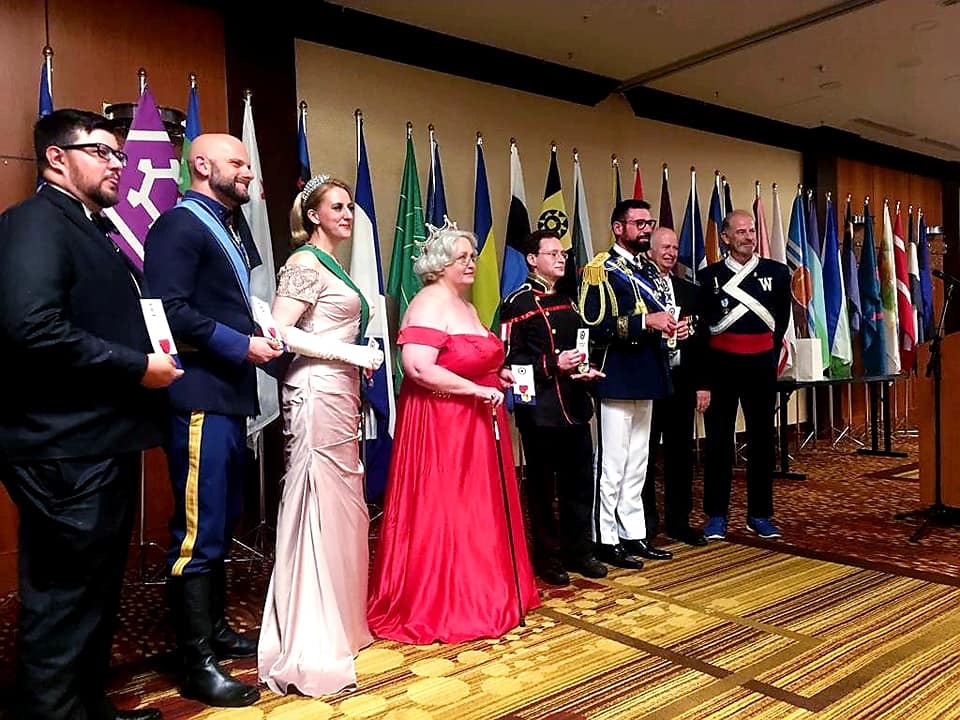 Honorees receiving the West Who Medal of Friendship

The gala dinner began with a formal reception in the Lancaster Room at 6:00pm, with dinner served at 7:00pm. During the gala, a production company shooting a documentary about the event fitted Grand Duke Travis with a microphone so his conversations and witty asides would be recorded for posterity. The meal was served in courses and included Caesar salad, herbed potatoes, chicken with white sauce, and asparagus. Red and white wine was provided by the Principality of Aigues-Mortes and the chocolate ice cream with raspberry ganache dessert was provided by Westarctica.

As is traditional with past MicroCon events, following dinner, there was an awards ceremony where each nation was afforded the opportunity to distribute honors, awards, and medals to their fellow attendees. Grand Duke Travis received nine honors, Prime Minister Farmer received six awards, and Prince-Consort Dinny received three awards. At the end of the gala, the Grand Duke and Prime Minister bestowed two knighthoods in the Order of the Orca, five knighthoods in the Order of the Snowflake, and one Order of the Desert Heart.

There were 37 micronations in attendance at the conference.