MicroCon 2015 was a summit of leaders from various micronations that took place in Anaheim, California on 11 April 2015 and was the first such event to occur under the MicroCon name.

It was organized and hosted by the Republic of Molossia and was attended by 36 representatives from 17 different micronations. 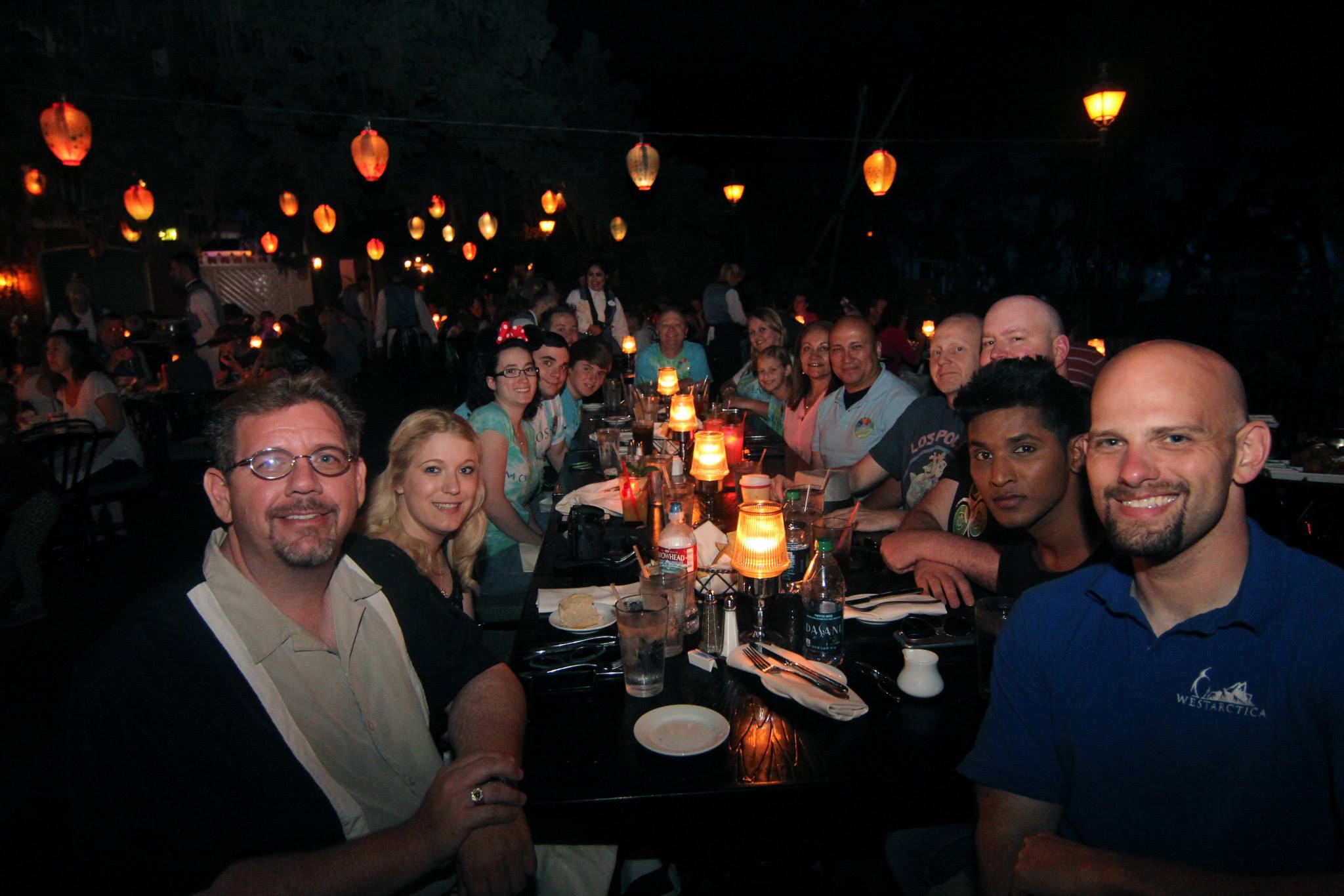 On 9 April 2015, two days before the main MicroCon event, a large group of the micronational delegates gathered together at the Disneyland theme park in Anaheim, California for a relaxed afternoon of fun and friendship.

All dressed in casual wear, the delegates enjoyed riding roller coasters and classic Disney attractions. Commodore Miller of Molossia generously provided dinner for the entire party at the famed Blue Bayou restaurant located in New Orleans Square inside the Pirates of the Caribbean Ride. 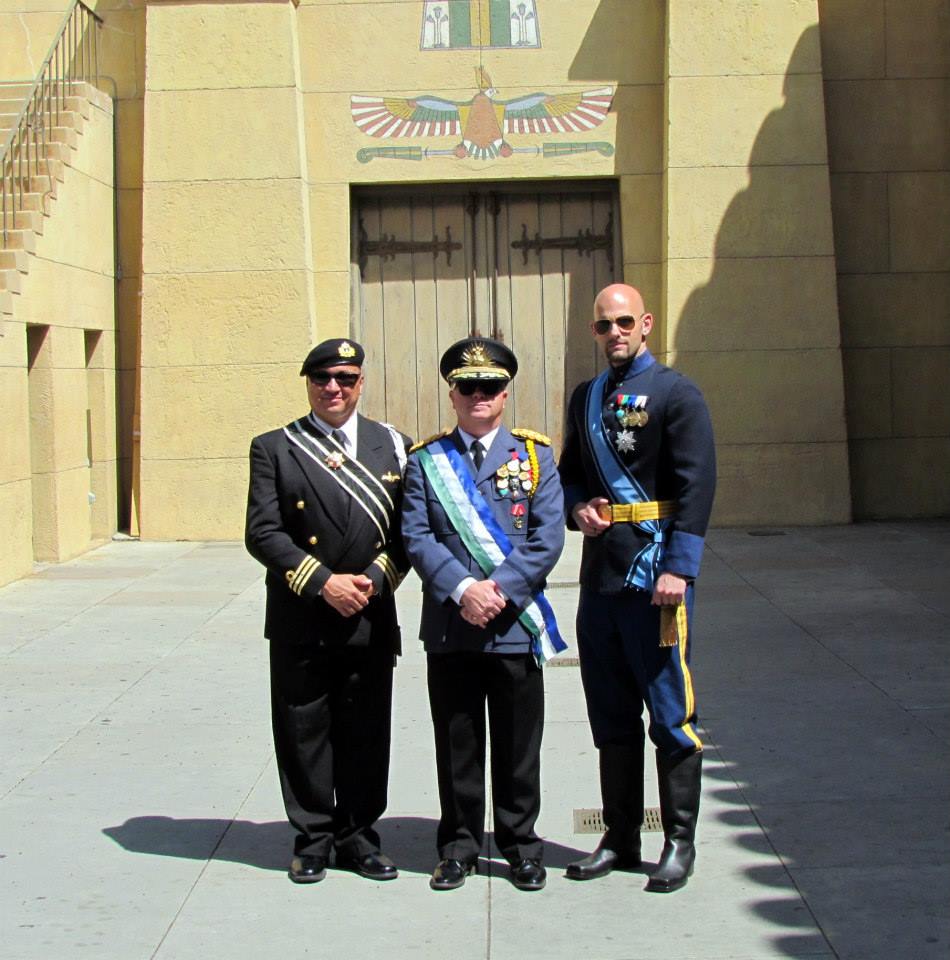 On 10 April 2015, the day before the main conference was scheduled to occur, President Baugh organized a group tour of Hollywood, California. The tour was led by local Los Angeles resident, Grand Duke Travis and his consort, Prince-Consort Dinny.

As a former professional actor and filmmaker, Grand Duke Travis was uniquely suited to lead the tour of Hollywood Boulevard. Also on the tour were King Christopher of Vikesland, Prince Arthur of Homestead, Baron Stogner, Commodore Jonathan Miller and his wife Katie, in addition to President Baugh and the First Family of Molossia.

The tour group met at the Hollywood and Highland Complex, located centrally in Hollywood and one of the most popular tourist attractions in the world. While visiting the hand-prints outside the Chinese Theater, President Baugh provided a phone interview to a reporter from NPR concerning MicroCon and micronations. After the interview was concluded, the group walked down the Hollywood Walk of Fame on Hollywood Boulevard, interacting with the costumed characters and street vendors while photographer Matt Roth snapped pictures of them in the scenic surroundings.

Then they made their way to the historic Egyptian Theater where Grand Duke Travis explained the history of the majestic location in the outer courtyard of the Egyptian-themed building. Afterward, the group was hungry and decided to dine at the adjacent Pig & Whistle restaurant where they were seated together at a large group table. 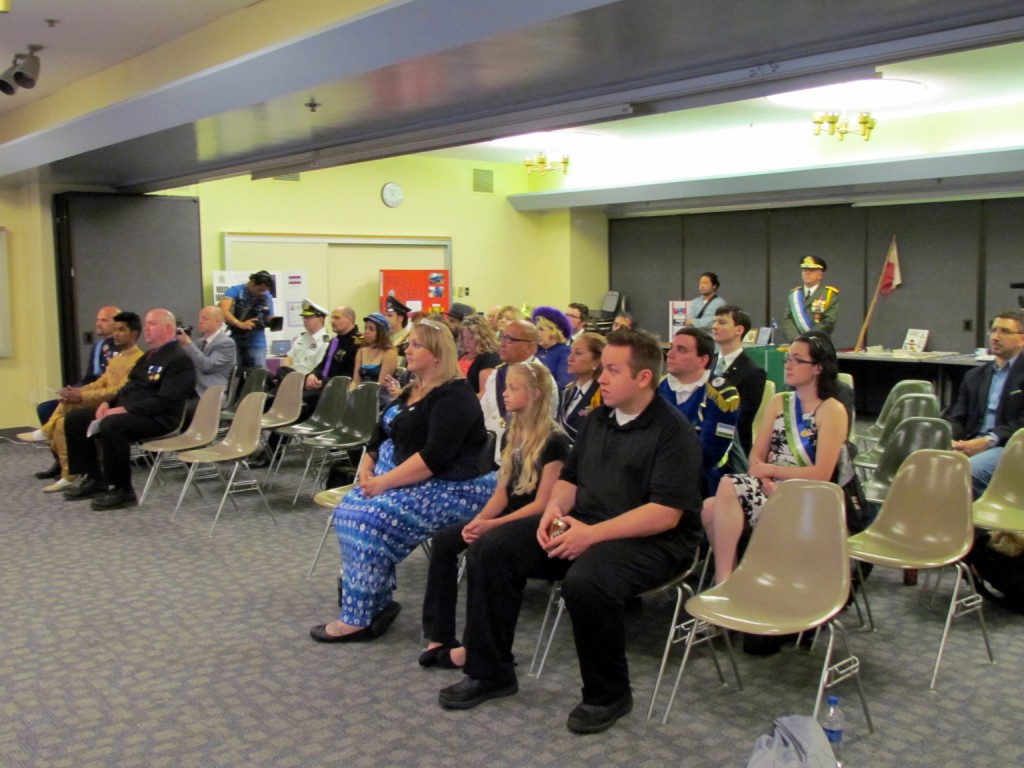 The main gathering of MicroCon occurred on Saturday, 11 April 2015 at the Anaheim Central Library in Anaheim, California from 10:30am until 2:30pm.

The delegates of the attending nations were invited to set up small displays showcasing items of interest from their countries. The table displays ringed the perimeter of the room in which the conference was held and each display was approximately three feet square.

After initial opening remarks from the MicroCon founder and organizer, President Kevin Baugh, the conference presentations began with a keynote address via YouTube by Mr. Steven Scharff, noted micronational patriologist, speaking about micronational history and concepts.

Presenters used slides and video to highlight their presentations, and various unique perspectives were shared with the audience. One of the significant moments of the event was a medieval warfare demonstration by the Knights of Shiloh, when the fully armored knights began battling in the midst of the convention. 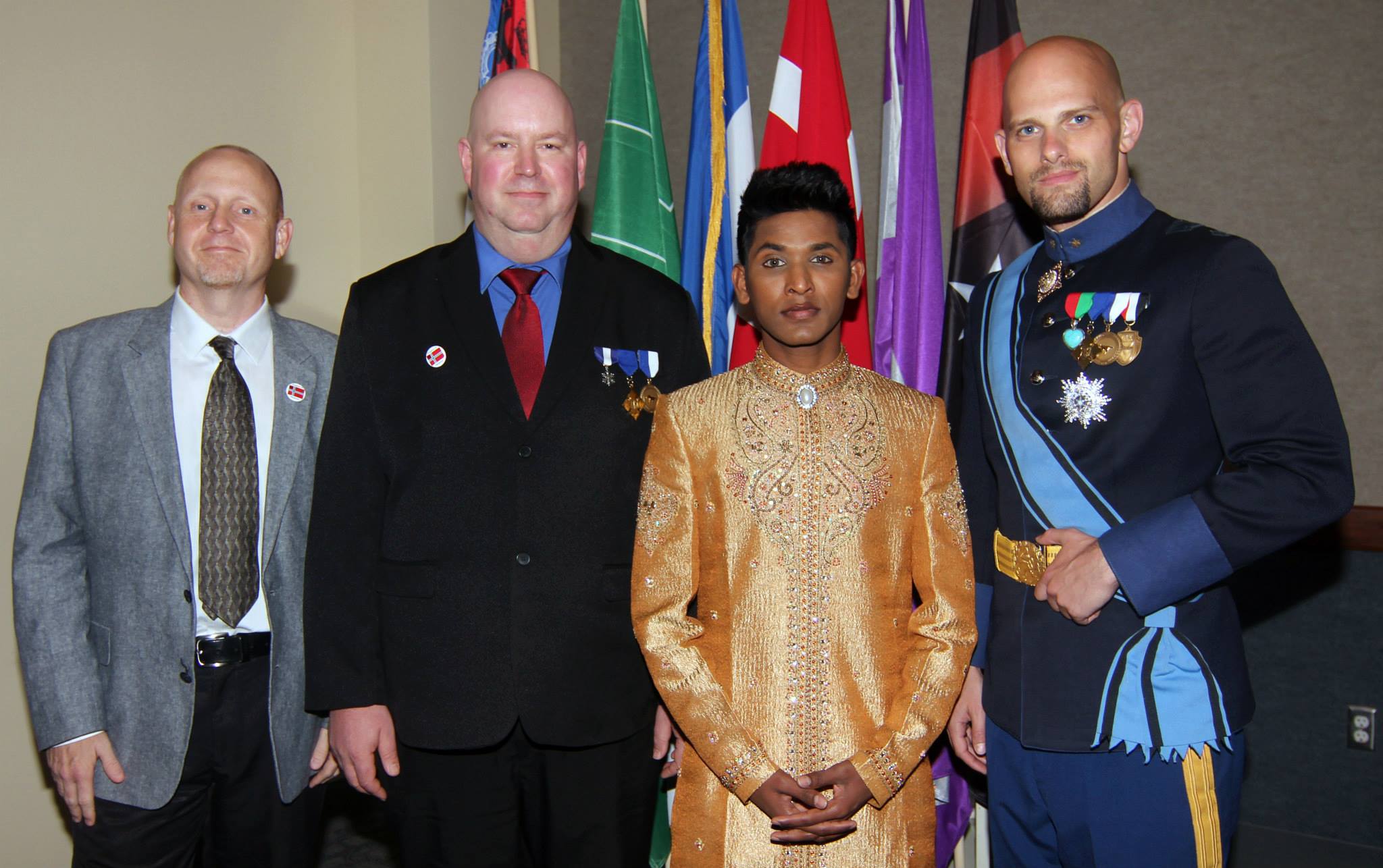 There were three breaks, including a longer lunch break, during which the delegates socialized and networked. The media was also in attendance, including an affiliate of the Today Show as well as noted micronational photographer Matt Roth. After four hours, the conference adjourned and the delegates departed, some to their home nations, and others to prepare for the evening's event, the MicronCon Cotillion.

The delegation from Westarctica included Grand Duke Travis, Prince-Consort Dinny, and Baron Stogner, who was representing both Westarctica and Vikesland. King Christopher of Vikesland attended all events at the side of Westarctica's delegation.

Grand Duke Travis gave the second speech of the conference, entitled But What's the Point - Micronations that Matter. In the presentation, His Royal Highness discussed Westarctica's transition from a new country project to a non-profit corporation and encouraged attendees to attach their micronation to a worthy cause. 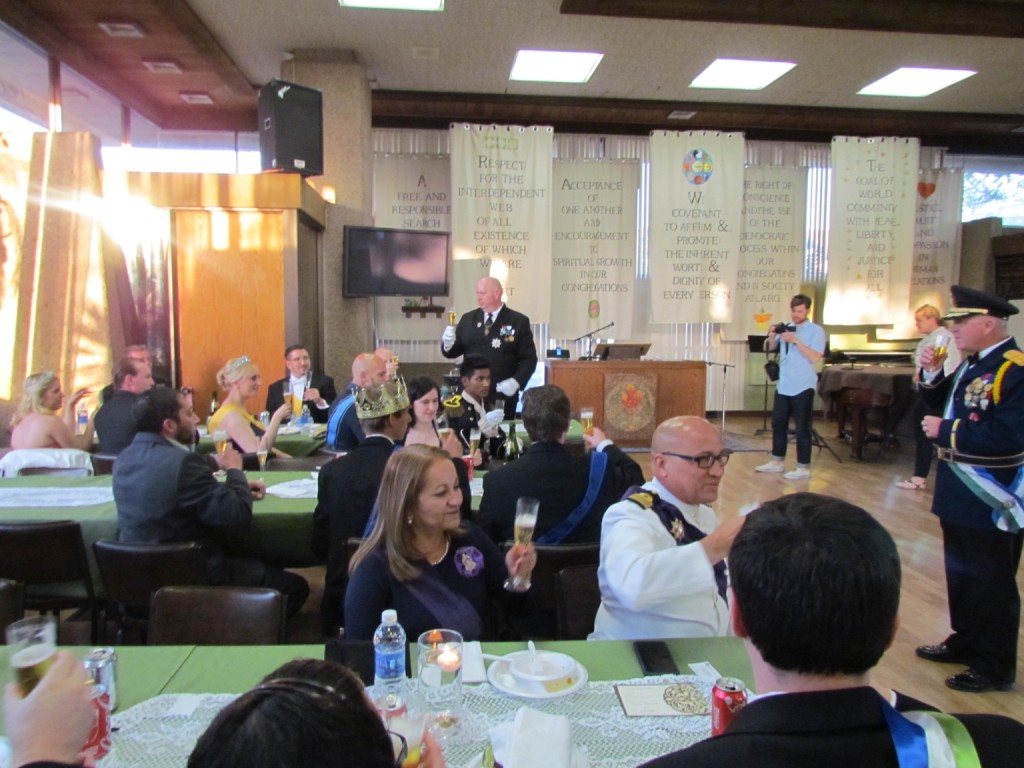 King Christopher of Vikesland proposing a toast to President Baugh

The MicroCon Cotillion was a semi-formal ball, arranged as a social event following the convention.

Attendees arrived at the Unitarian Universalist Church in Anaheim at 5:30 pm, dressed in their finery for an evening of dining and dancing. After a catered dinner and some dancing, awards were presented by various micronational leaders to their peers and associates. Among the presenters were Grand Duke Travis of Westarctica, King Christopher of Vikesland, King Timothy of Shiloh, Queen Anastasia of Ruritania and Prince Arthur of Homestead.

During the catered dinner, Grand Duke Travis began a series of toasts by giving a rousing toast to President Baugh in honor of all the hard work he had done to organize the event as well as his longstanding commitment to the betterment of the community of micronations.

Following the awards ceremony dancing and socializing continued until the evening wound down and each leader and their party took their leave. 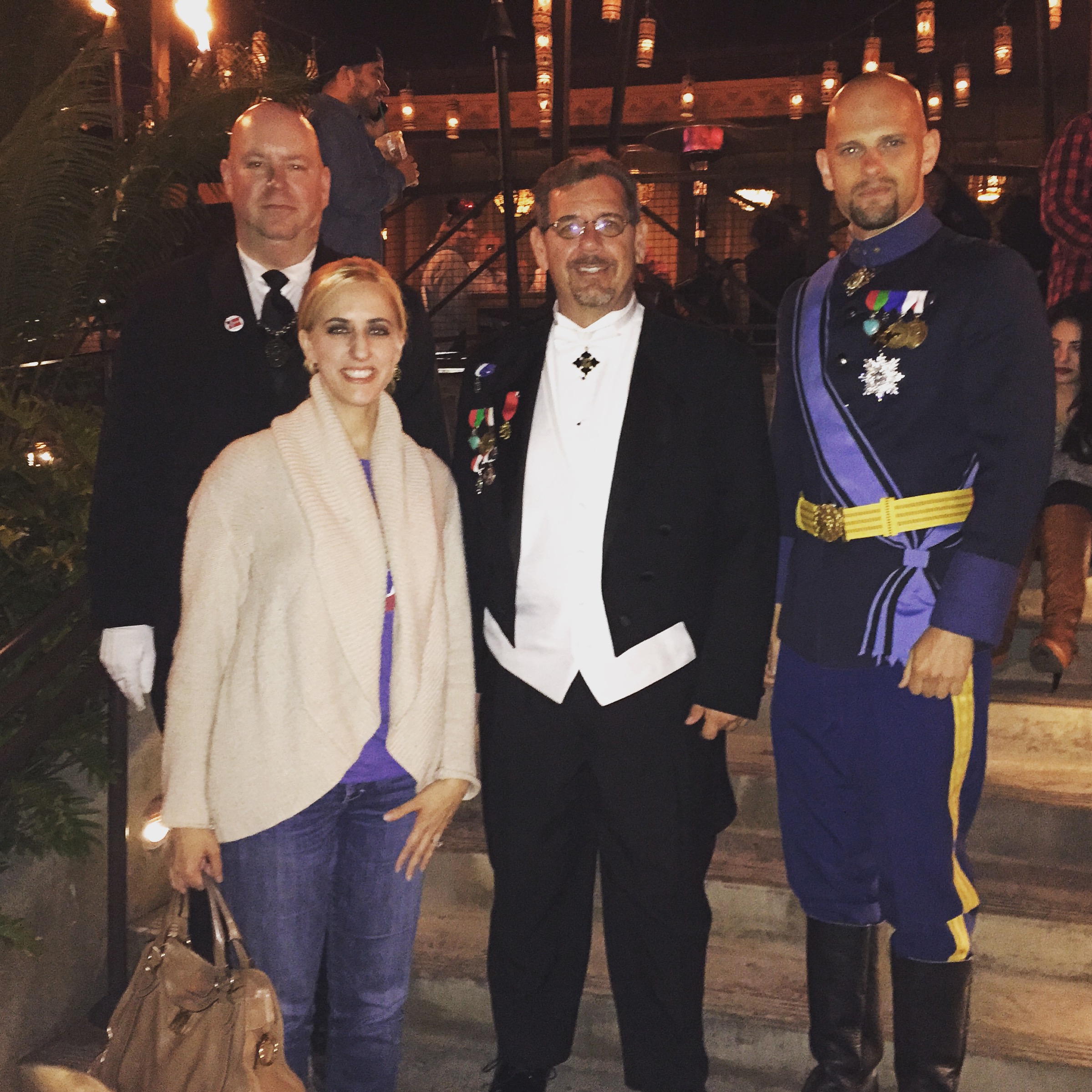 After the conclusion of the main events of the conference, a small group of delegates retreated to the quiet dignity of Downtown Disney where they enjoyed cocktails by a roaring outdoor fireplace at a tiki bar located in the center courtyard of the Disneyland Hotel.

While there, they answered questions from many interested passersby, who found themselves drawn to the intriguing uniforms and medals worn by the micronational leaders.

The following is a list of all delegates who gave a presentation during MicroCon 2015 along with the nation they represent and the topic they presented.