Sanctified Order of the Crucifix

The Sanctified Order of the Crucifix was created on 20 September 1995 as an Order of Kolios. The intention of the order is to honor those who have excelled in Christian service. Membership in the order is currently awarded by Prince Garibald, as the head of House Bärenhalb. 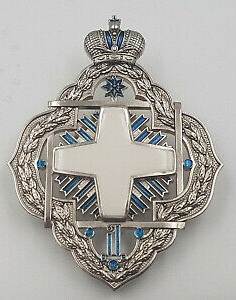 The order was created the day that the then Kingdom of Kolios was founded as the higher of two orders. When Kolios became a principality within the Empire of Agber on 7 January 1998, the order was restructured as an order of the Empire. This move left the Order of Kolios as the only order exclusive to the Principality. The order was returned to Koliosian control on 18 June 2020, instead of being returned to its original position in the precedence of Koliosian honors, the Order of Kolios retained its position as the highest honor.

The order was overhauled as a part of the sweeping changes enacted by Prince Garibald when he assumed the throne on 26 February 2022. These included a redesign of the regalia, re-focusing the honor to its originally stated intent, shrinking the number of active members, and transferring authority over the award to House Barenhalb.

The original records containing the list of members was lost sometime in the mid-2000's. While Empress Arlene was able to recall a few of the members, the names of thirteen of the Knights and Dames were thought to be lost forever. Due to this fact, Princess Arlene stated that she often considered either opening up the number of members allowed, or abolishing the Sanctified Order of the Crucifix altogether. When she reconnected with Margrave Jordan in 2020, his personal records were able to restore eight names to the register.

Five names are still unknown. Although there have been attempts to reconnect with others involved in the Empire's early history in hopes one of them may have personal records that can fill in the gaps, none have thus far borne fruit.

The official intention of the order is to honor those who made significant accomplishments that are Christian in nature. Unofficially, it was typically bestowed in recognition of general achievements until 2022, when Prince Garibald returned the order to its original intent.

The order has only one class; Knight. Members of the order may wear the star of the order. In the Koliosian tradition, there are no title differentiations for genders.

Former Knights of the Order