Alliance Between Westarctica and Molossia 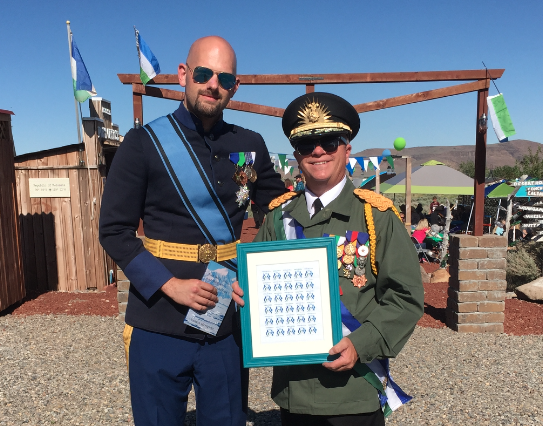 The shared history of the two nations began in 2005, shortly after the shift from the former identity as the Achaean Territory of Antarctica. The first significant interaction between the two nations was the signing of an agreement of mutual recognition. That year, Grand Duke Travis and President Baugh met in Washington, D.C. This was the first state visit of any kind for Westarctica. The two became fast friends, and various correspondence and knighthoods were exchanged between the two leaders.

After the Grand Duke's 2006 abdication, he fulfilled various roles, in the Molossian government. in 2006, President Baugh convinced him to rejoin the micronational community by turning his private residence into a Molossian colony. Travis agreed, and was subsequently named as the Governor of the Protectorate of New Antrim. In this role, Travis was left to rule mostly as he saw fit. During this time, he also served as the Grand Admiral in the Molossian Navy, which was a mostly advisory role to the President. Also of note during this period was Travis' participation in the Molossia-Mustachistan War, the Battle of Lake Jean, and the New Antrim Tobacco Crisis.

In 2009, after moving from the eastern United States, and subsequently the physical territory where New Antrim was located, Travis and President Baugh agreed that it was time to end the colony's existence. Almost immediately thereafter, Travis was named Governor-General of the Desert Homestead Province. Travis' new duties as Governor-General were mostly identical to those in his previous post as Governor of New Antrim. The closer proximity to the Molossian homeland allowed Travis to make his first trip to Molossia that same year. The time spent serving in this post was crucial, as it largely inspired Travis' return to serving as Sovereign of a micronation of his own.

In 2009, President Baugh began encouraging Travis to rejoin the micronational community as the head of his own nation. About this time, Travis learned of land his then wife's family owned on the Carrizio Plain, in central California. Thus began the Kingdom of Calsahara, that same year.

Travis, ruling under the regnal name of King Montague, immediately resigned from all official duties within Molossia. He was, however, allowed to keep the honorary rank of Grand Admiral in the Molossian Navy, primarily as a show of gratitude for his service, from President Baugh. The bond of friendship and mutual respect continued throughout the reign of King Montague, with multiple state visits, and the royal couple attending President Baugh's wedding to new First Lady Adrianne Baugh in 2011.

Since resuming the title of Grand Duke, Travis has continued the tradition of close relations with Molossia. This has included interactions at the various MicroCons, and the conferring of knighthoods not only on respective heads of state, but additionally upon other members of leadership in both Westarctica and Molossia.

While Westarctica has no formal alliance with Molossia, informally they are among, if not the, closest allies the nation has. The two nations have established mutual recognition, military cooperation, as well as trade relations.